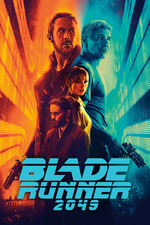 I very much enjoyed Blade Runner 2049. Seeing Harrison Ford emerge as older versions of characters he originally played 30+ years ago is my new favorite thing. I can’t wait to see him step out, wearing a cowboy hat, as Bob Falfa in “American Graffiti, the Next Generation” or whatever.

Roger Deakins has outdone himself here. I’m tempted to rewatch the film with the sound off, so I can just look at it. Every scene is gorgeous. I learned a new word while reading about it: “Chiaroscuro”.

I was concerned about Gosling as K but it turns out he’s very well-suited for the role.

On the other hand, Jared Leto remains a distraction. Thankfully his role here was, although important, limited.

Sylvia Hoeks was terrific as Luv and Ana De Armas reminded me that I have yet to watch “Her”.

Anyway, my concerns about the sequel to one of my favorite films were unfounded. “Blade Runner 2049” is a worthy continuation and a terrific movie on its own.